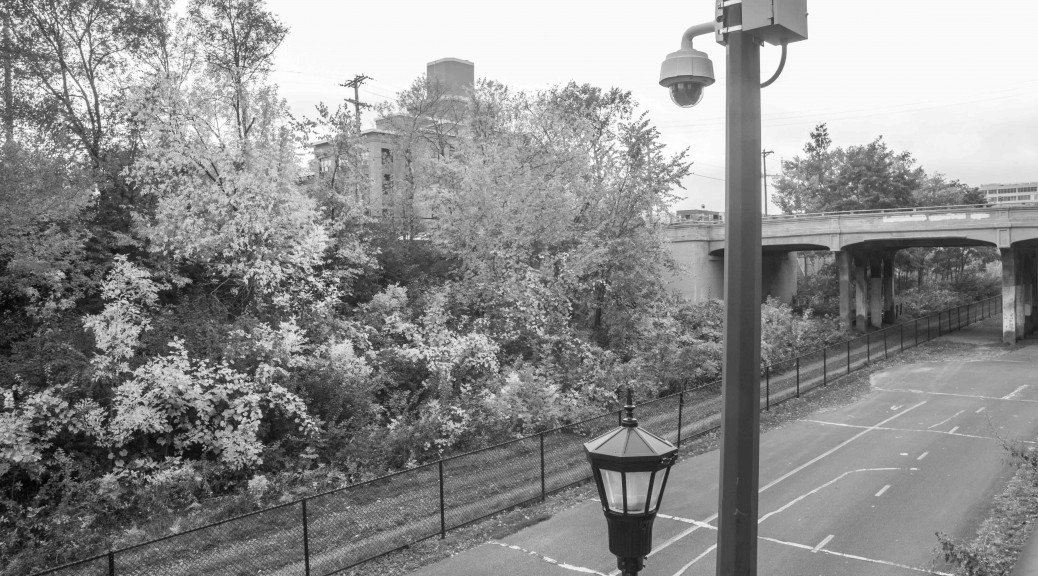 At this point only the most stubborn would attempt to deny the connection between the highway and structural violence. The office worker who glides comfortably from their workplace in downtown Minneapolis to their house in the suburbs and the person on the street whom the office worker only ever sees from the skyway both exist in their present forms because the police stand at the ready in case the person on the street decides to take action to get what the office worker has got, and the architecture of the city itself works in tandem with the police in ensuring this separation of decidedly closed loops of circulation, with highways and skyways reserved for some and sidewalks and bus routes for the rest. There are even some parking decks in the skyway system that exit directly onto the highway. But we want to talk about a relationship that is less obvious but no less real, the relationship between the greenway and police murder, between the greenway and displacement, between the greenway and the continuing climate catastrophe.

At first glance nothing could seem more absurd. The greenway is progressive. The greenway is eco-friendly. The greenway is for regular people. You know, people like us. What goes unexamined in statements like these is just who is included in this us and who is excluded. Witness for example the furor that erupted when muggings occurred on the Midtown Greenway on three consecutive days in 2015. Three muggings in three days would barely register if they took place a block south on Lake Street, but the muggings on the greenway enraged certain citizens, who fumed online in thinly coded language about the barbarity of anyone who would rob a biker, betraying a total lack of awareness of the role the greenway plays in shuttling the modern leisure class safely through destitute parts of the city to destinations like the co-op in Seward, the restaurants at the Midtown Global Market, or any of the numerous condos that line the greenway in Uptown. What does it matter to someone living in one of the neighborhoods that the greenway bypasses that the person they are robbing is passionate about progressive causes? The only thing that matters is that they have shit worth taking and are an easier target than someone in a car. Following the muggings Soren Jensen of the Midtown Greenway Coalition, an organization whose primary function seems to be to cloak the interests of business and development in the language of community, advised bikers in an interview with the Star Tribune to call the cops if they see groups of people loitering on the greenway. This despite the fact that anyone who uses the greenway regularly knows that people often congregate there not to rob anyone but because they have nowhere better to go, because it provides more shelter and less of a chance of being harassed by police than other public spaces in the area. In light of this Jensen’s exhortations for those passing through the greenway to ally themselves with the structural violence directed against those attempting to dwell there makes plain that the greenway is not there for everyone to use as they wish like the commons of some mythic past or future, but rather exists for a specific reason, to smooth the flow of certain people between various sites of work and play, if things that one must pay to do can ever really be called play. In this way the greenway can be viewed as a single piece in a giant mosaic of infrastructural projects and consumer trends that have been gaining steam for a while now.

At this point in time the market has realized that the old way of doing things, the way of suburbs and strip malls, is no longer sustainable. Not because of the violence needed to secure the existence of such places or the environmental havoc they wreak but because they are really fucking depressing. Too many people sense on some level the emptiness and destruction on which such a world is built and lose their desire to work and to play alike. The forces of the market cannot sit idly by and let this happen, and so a new capitalism must be forged, a sustainable capitalism. The modern capitalist subject who bikes to work, eats organic, puts a few solar panels on top of their house, posts an outraged Facebook status every once in a while can go to sleep feeling that they have done their part, or at least that they are not as guilty as those in the suburbs. But all the greenways, light-rails and co-ops in the world can’t conceal the fact that the concentration of carbon in the atmosphere recently eclipsed 400 ppm. Can’t conceal the communities across the Global South that have smoothly transitioned from being devastated by the drilling of oil to being devastated by the mining of the minerals needed to make solar panels and iPhones. Can’t conceal the fact that people’s rage is being expertly exploited by corporations like Berkshire Hathaway, which funnels millions through its various foundations into fights against pipelines yet just happens to own BNSF Railway, the railroad that currently transports 75% of the oil fracked in the Dakotas (approximately 600,000 barrels a day, much more than the 470,000 barrels that the Dakota Access Pipeline will transport if it is completed). In fact about 50 BNSF trains filled with this highly-volatile oil pass through Minneapolis each week on their way to refineries and ports, many of which Berkshire Hathaway also owns. Unsurprisingly, Berkshire Hathaway does not fund organizations that challenge the oil economy as a whole and not just the pipelines, and the spokespeople of the organizations it funds often work to discredit those who do as ‘unrealistic.’ And of course we shouldn’t forget that a major argument used by the state in favor of destroying much of Minnehaha Park and numerous important environmental and religious sites in order to reroute Highway 55 as discussed elsewhere in this issue was that the reroute of the highway was a necessary first step towards building the light-rail system, although one would think that if the goal was for people to use the light-rail building a highway parallel it would be the exact opposite of what one should do. This argument proved to be effective in driving a wedge between mainstream progressives and those who were putting their lives on the line not to reform industrialization but to stop it. Similar rhetoric is currently being used to argue for the removal of the K-Mart at Lake St and Nicollet Ave, as this is said to be necessary to build a streetcar line that will run down Nicollet connecting the restaurants and boutiques a few blocks north of Lake with those a few blocks south. The fact that this will destroy one of the last stores in the area that those with low-incomes can afford as well as a large parking lot where people can gather is simply seen by our progressive city council and neighborhood associations as an added perk (not that we are any friends of K-Mart, of course). What all these examples make plain is that the only thing sustainable capitalism ever sustains is capitalism itself.

So what then? We’re not arguing that use of the greenway should or could be replaced with some other more moral mode of circulation. Some of us use the greenway everyday, just as some of us eat organic when we can afford to, but we do these things because we prefer them to the similarly flawed alternatives, not because they will change anything fundamental about our society. Clearly they instead function hand-in-hand with the current order, as evidenced by the condos sprouting along the greenway like hideous brick-and-glass mushrooms and the gentrification taking place in Central around the newly opened Seward Co-Op Friendship Store. While we are forced to circulate as subjects of this brutal system, forced to work and to buy groceries and to pay rent and all the rest, we might make use of these amenities at times, but we should be careful not to mistake them for solutions to the mess we find ourselves in. Solutions will never come in the form of consumer choices. We only begin to work on real solutions when we stop identifying as consumers and citizens and begin thinking of ourselves as insurgents against this regime of consumption and death, and begin to link up with others who think similarly.