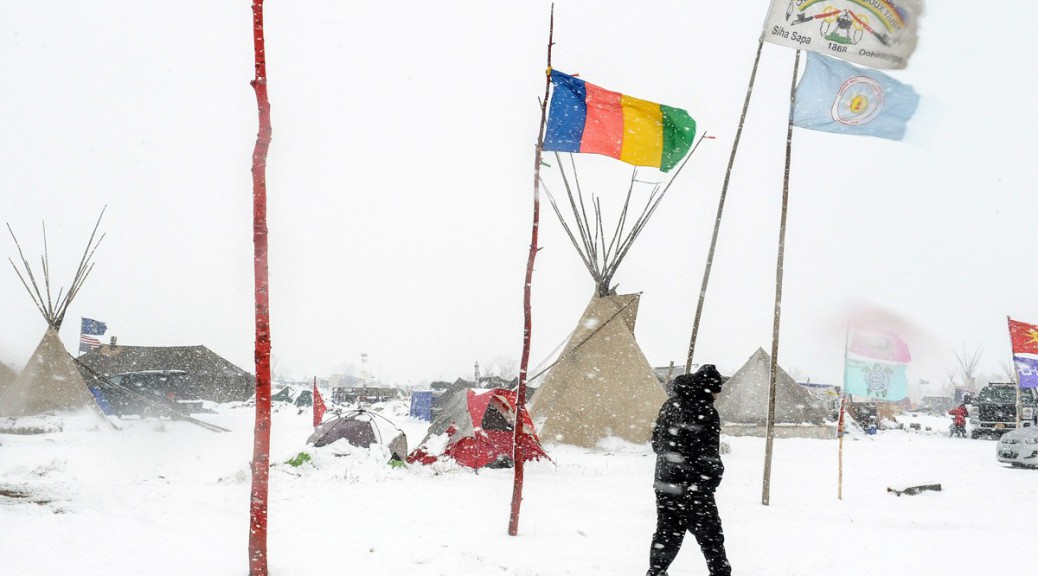 What can you say about Standing Rock? How to begin to describe what has been happening there in the past months to someone who hasn’t been? It’s a question that has been needling me ever since I left. A real answer would take up much more space than I have here and would be written by someone with more knowledge than me, as I only spent a few weeks there. The short answer is that it’s complicated. One thing I learned quickly while there was to be wary of those claiming to have the only correct or official program for resisting the pipeline and standing in solidarity with indigenous warriors. Like any group, Native people are not homogenous. Some are prepared to defend their land and people using whatever tactics are necessary, some are understandably cautious given this country’s legacy of violence against them, and some are classic politicians who despite good intentions act to neutralize any momentum generated by the people they claim to represent in return for a seat at the negotiating table. This last group, in Standing Rock as much as anywhere else in the world, is elevated to prominence by colonial power structures such as non-profits, tribal governments and media, and in a bizarre but unsurprising reversal any non-Native who seeks out as wide a variety of Native views as possible and evaluates how best to contribute to the struggle accordingly rather than simply parroting the official leadership is accused of perpetuating colonialism. Native spiritual practices are then mobilized to pressure warriors to remain ‘peaceful and prayerful,’ in a manner similar to how Christianity is often deployed against non-Native struggles. This was clearly especially painful to witness for the multiple Natives, both Sioux and non-Sioux, who explicitly told me that their traditions have never recognized a division between praying and fighting back, with one elder labeling the imposition of Western notions of pacifism on Native traditions ‘spiritual abuse.’

Yet in spite of such obstacles there are many powerful currents brewing at Standing Rock. In addition to the actions taken against the pipeline, covered elsewhere in this issue, people from all across Turtle Island and the world are building bonds and generating momentum against industrial civilization that I think will prove extremely powerful in the coming years; indeed this momentum has already manifested itself in a variety of anti-infrastructural actions around the continent in the past months. Furthermore, people who have only recently found themselves within the struggle are listening to and learning from those for whom struggle has been a reality for generations. This is especially important given the tendency of the white Left in this country to gloss over the genocidal foundations of this society and thus claim victory the moment a few reforms are offered, leaving those who can’t or won’t stop pushing forward even more isolated than before. We can only hope that this renewed historical awareness will encourage us not to stop now. As anyone who spends much time at Standing Rock quickly learns, if you want to split a log of firewood you can’t just aim for the top of the log. If you do the ax will simply bounce off. Instead you must swing through the log at the larger piece of wood it is sitting upon. If we really want to kill this pipeline we can’t just swing at DAPL but must swing at the oil economy as a whole. And when DAPL is dead we will keep on swinging, not just at the oil economy but at this entire white-supremacist industrial nightmare. 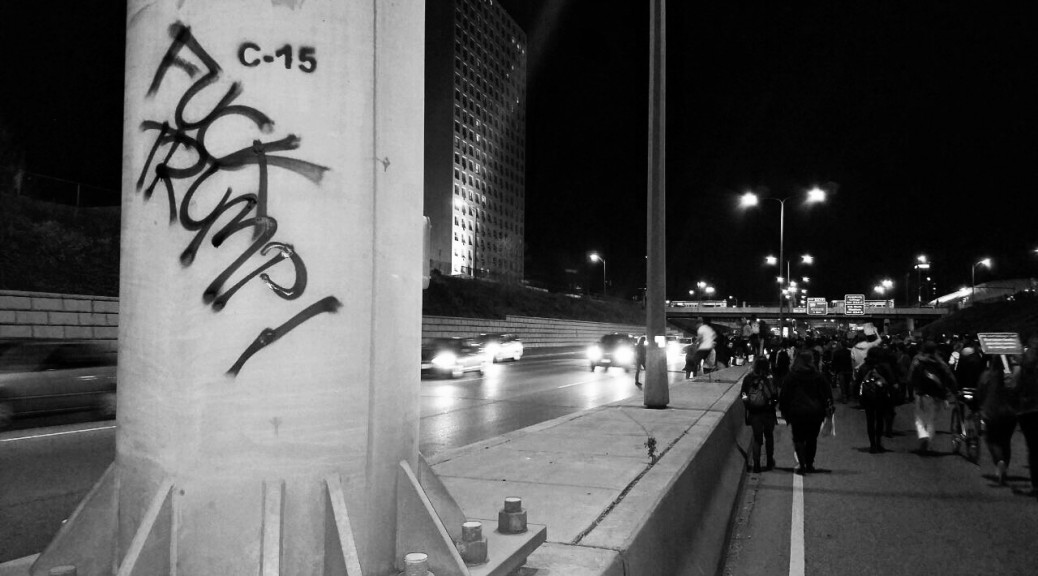 So they really went and did it. This time last year the Trump campaign was only just beginning to lose it’s comedic factor. Now Trump is just days away from taking office, and many are at a loss on how to navigate this new reality. Without promising any solutions, we would like to outline a combative strategy against the incoming regime and all manifestations of oppression and authority.

In the days following the election, even cities where riots did not erupt from anti-Trump demonstrations witnessed an antagonism unprecedented in recent history. In every metropolis throughout the country social peace was shattered, even where it was strongest. Even as the immediate momentum slows, calls to disrupt the inauguration ceremony on January 20th have picked up steam. Interfering with this spectacle holds potential, but the prospect of decentralizing conflict on the 20th and beyond is what really piques our interest. The model we elaborate here provides us with a loose strategy for spreading ungovernability, reducing the capacity of the Trump regime, and by extension local authorities of all parties, from operating.

This strategy is what we, and others like us around the world, call autonomous self-organization. Let’s take a moment to unpack what we mean by this. First of all, when we speak of autonomous action we refer to action taken outside of or separate from official groups and organizations. While useful at times, formalized relations such as these can not only hinder our ability to act but also leave us vulnerable to repression when actions can be tied to offices, spokespeople, or membership lists. For these reasons, affinity groups are often proposed as an alternative to organizations. Affinity groups refer to those friendships that most of us already have—those handfuls of comrades with which we have built, or are building, a deep trust. With our affinity groups or even alone we have the freedom to take initiative, acting on our own accord and on our own timelines without waiting for instructions or invitations.

In refusing to become followers in struggle we are also refusing to gather followers for ourselves. For this reason reproducibility is prioritized when acting. Spray paint is 97¢ if you can’t steal it, every home has a hammer, and concealing your identity is simple if you think ahead (see our September issue for some tips). The easier an act is to reproduce the more likely it is to generalize, and as attacks spread and more people join in it becomes more difficult for authorities to profile possible suspects, creating space for more to participate and for bolder actions to be taken. While isolated acts are manageable, generalized unrest can and does make it harder for law enforcement to operate, harder for them to harass, arrest, evict or deport us.

It is important to note that the framework of autonomous self-organization is not exclusive to small or clandestine actions. It can also inform how we approach mass actions such as demonstrations. Rather than the traditional march where we follow the bullhorn from point A to B, we can come together as a cluster of individuals and affinity groups who cooperate to carry out larger, public actions. The tradition of protest marshals solidifies a hierarchy between organizers and participants, stifling self-organization even when marshals aren’t directly facilitating the work of the police. Instead, different individuals and groups can come prepared to achieve their own goals, whether this means bringing a banner along with flyers to hand out, acting as a self-defense squad against right-wing threats, or having the tools necessary to carry out a targeted attack when the time is right. In this sense, every public call should be viewed as a call for self-organization, a call to step up with our own contributions, with the hope that they can come together to strike a chord.

It might be difficult to imagine anything meaningful produced in our current context from a handful of isolated acts of resistance, yet the world abounds with examples: gentrifying businesses closing in San Francisco after repeated vandalism, immigration enforcement raids aborted in London after spontaneous blockades, eviction lawyers in Berlin dropping cases after their cars are burned. These are small victories within western urban centers, but we have just as much to learn from the self-organized communities of southern Mexico, the squatted forest of the ZAD, or the maroons of the eighteenth-century South.

Over the past year, the Twin Cities has seen a number of acts that loosely fit within this framework. Some are claimed through anonymous communiques submitted to counter-information websites such as Conflict MN or It’s Going Down. Others simply rely on the eyes of witnesses and passerby, leaving us guessing as to their intentions or allegiances.

In the spirit of self-organization, we at Nightfall have no interest in becoming the single voice of anti-authoritarian views and critique in the Twin Cities. The actions we cover and the events we promote are not representative of any single group but instead resonate with us regardless of their stated affiliations or lack thereof. We look forward to others with whom this newspaper resonates putting their voices and clarifications out into the world in whatever format appeals to them. This newspaper only requires a printer and a few dedicated friends.

So far we have described a framework of attack—something we find to be a crucial component of liberatory struggle. However it is just that: a component. Equally important is to support each other and build communities to sustain ourselves. The balance between these two has been described elsewhere as spreading anarchy and living communism. Any attempt to sever one component from the other will surely lead to defeat. As a friend once said, the commune is that which sustains the attack and the attack is that which enlarges the commune. We briefly explore this in a separate article [in issue 4.]

Everyone agrees, the situation is bleak. The Democratic Party is scrambling for relevancy, desperate to redirect different struggles and campaigns into membership drives. Every leftist group sees an opportunity for a new organization to take the Democrats’ place; that this organization is always their own is surely just a coincidence. These false solutions only offer the certainty of defeat, of death. We see in autonomous self-organization the potential for something more than bare survival, something like life. Our lives belong to no vanguard, organizer, or leader—only to ourselves. 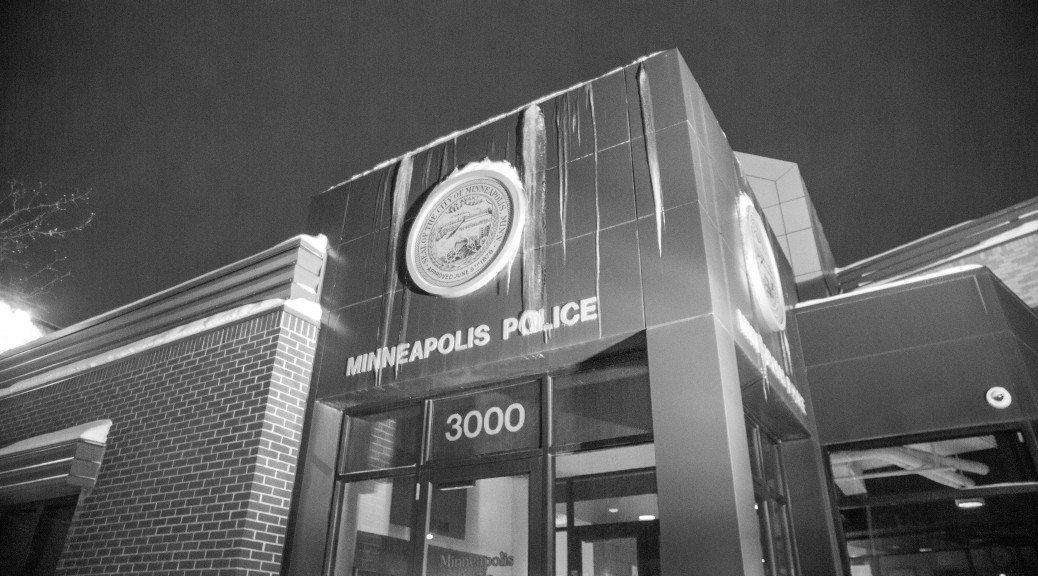 – Autonomous Organizing in the Age of Trump

– Supporting Each Other in the Age of Trump