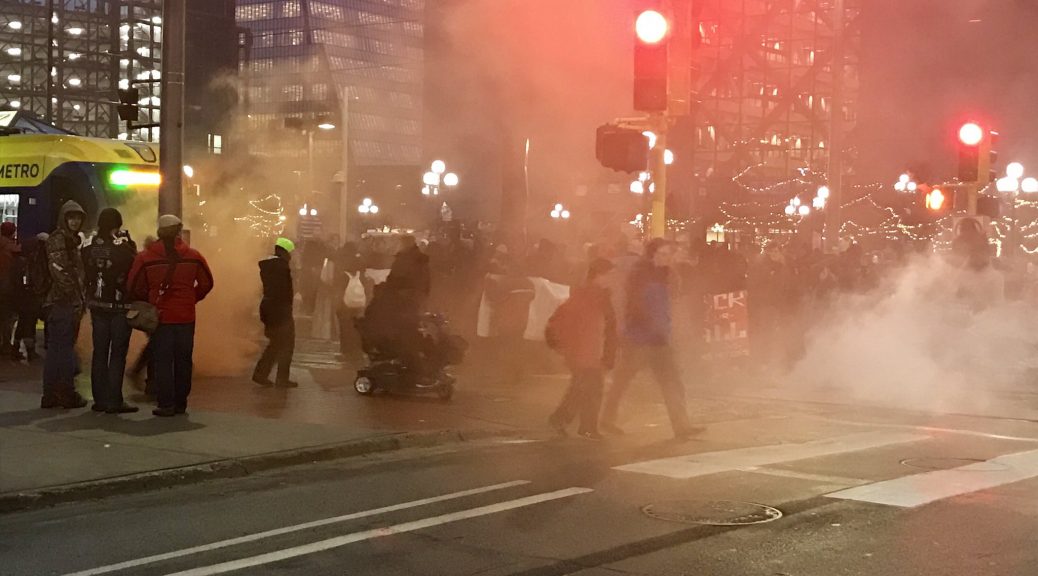 We’ve now passed the one year mark of Trump’s presidency. This time last year we were fast learning what his reign had in store for us. Following the riotous eruptions nationwide on the day of his inauguration, immense numbers of people participated in Women’s Marches, others spontaneously blockaded airports, and hundreds stormed the UC Berkeley campus on February 1st and laid siege to the police-protected venue hosting Milo Yiannopolous.

In the year since nothing has slowed down. The regime continues to launch assaults on a daily basis: voting down net neutrality, revoking the temporary protected status of thousands of Central American migrants, allowing states to require people to work in order to acquire Medicaid. All of which was punctuated by scandal after scandal, provoking our indignation at Trump’s latest racist remark or indiscretion. Rage against the police as well as the far-right has escalated and spread to every corner of the country.

At the beginning of 2017, we published an essay “Autonomous Organizing in the Age of Trump” which looked to the year ahead while sketching the outline of a possible strategy for resistance. Without falling into passive retrospective we want to consider the past twelve months with this strategy in mind, and to see how we can prepare for the days, months, and years ahead.

Autonomous self-organization is the term we used to describe the approach we laid out. By autonomous we mean actions taken outside of formal organizations, parties, non-profits, etc. In place of organizations we suggest affinity groups, the close circle of friends whom one trusts deeply— as trust and a shared vision is necessary for acting together in a meaningful way. By self-organization we mean that there are no leaders to follow when acting, that affinity groups should strive to take active roles instead of passively participating. In addition to guarding against the threats posed by authoritarianism, repression, and co-optation, self-organization makes our struggles more vital and effective, taking away the passivity inherent in waiting for someone higher up to tell us how to achieve the world we want as well as the disappointments and frustrations we encounter when we go along with something that feels wrong to us just because the more experienced or legitimate people say it is the right path.

On January 20th, 2017 perhaps a thousand people marched from south Minneapolis to downtown against Trump’s inauguration. The night before, posters were wheatpasted along the route of the march with anti-state messages that interrupted the prevalent narrative that Trump was to blame rather than the whole system. After the mass march concluded in front of the county building, some came together on the light rail tracks and began shooting off fireworks, drawing in more and more people bored by the politicians’ speechifying before deciding to march. The crowd shot off more fireworks at the youth jail and vandalized the nearby Wells Fargo headquarters before quietly dispersing. By all accounts, there was no one in charge, just a convergence of affinity groups who each brought their own goals and contributions—fireworks, banners, spray paint, a sound system, etc—together forming a successful action.

Between larger public actions, single affinity groups can take action in a decentralized manner while honing their skills. For example, multiple vandalism attacks on gentrifying businesses in south Minneapolis took place over the past year, with at least three reported in February and one more on Halloween. Beyond these types of attacks, the idea of affinity groups applies more broadly to any time a crew of friends organizes together to accomplish a task, such as a crew of graffiti writers who steal spray cans before painting the town.

It is hard to think of a place where this approach was better put to into practice recently than at the G20 summit in Hamburg. When the police cracked down on the large demonstration on the eve of the summit, the crowd fragmented into smaller mobs that split up throughout the city center, wreaking havoc as they went. Smaller groups attacked police officers, burnt luxury cars, and blockaded intersections all night before crowds re-converged at dawn. The police, who had been prepared for the threat of a single enormous crowd, were powerless to contain the decentralized and autonomous resistance that spread throughout Hamburg. The police would not regain control of the city until the end of the summit. In the meantime, a liberated zone was established and people were free to do as they pleased—perhaps they enjoyed a drink outside with friends, covered the walls in artful slogans, or looted a convenience store. Speaking on revolutionary organization, the Invisible Committee write “by successfully reclaiming urban districts and areas of the countryside, by establishing relatively secure zones, it became possible to go beyond the stage of discrete, anonymous activity on the part of little groups.”

Approaching this question locally, we’re obviously starting from a much smaller scale. Still, there is something to think about when a masked individual steps away from an anti-fascist demonstration and tags “Antifa Zone” on a wall, as happened last August along Cedar Ave. It shows, first of all, that in this neighborhood we have some amount of power, that one could brazenly declare such a thing in broad daylight—if a right-winger could do the same with one of their own slogans, they haven’t dared to try it yet. Second, and perhaps most importantly, it shows that police control is not omnipotent, that there are gaps in the police’s ability to maintain order. It is by expanding these gaps in police power that we open up the potential to create a real “antifa zone” or a liberated space, just as the decentralized attacks in Hamburg opened up such a space despite the twenty thousand police officers summoned to the city.

To expand these gaps through decentralized actions, emphasis is placed on actions that are easy to do, with tools that are easy to acquire. Paint is cheap and easy to find—pouring it in a bottle and tossing it at a bank ATM is simple to accomplish. Ten more affinity groups inspired by the paint attack could easily do the same with a little effort. For example, from the end of summer until Columbus Day, the Pioneer Statue in northeast Minneapolis was vandalized at least four times, presumably by different people or groups. The first was communicated anonymously over counter-info site Conflict MN; those that followed it were apparently inspired by the initial defacement, finding it easy to repeat. Likewise with a wave of vandalism against the police also in northeast Minneapolis. Over the summer several anti-police slogans were seen spray painted in the area, and come autumn there were reports of graffiti at the police union headquarters, a cruiser and the MPD substation itself. From the hand styles it again seems safe to assume these were often from different individuals or affinity groups.

For these practices to truly proliferate, they must spread beyond any particular subculture, scene, or identity. The state and the media have latched onto the term “antifa” as an identity for a certain set of rebels who participate in militant actions. With this label, or any other, individuals are put at a distance from everyone else, making them appear foreign rather than as as one’s neighbor, one’s coworker, one’s friend. The goal with this maneuver is isolation, preventing rebellious practices from spreading all throughout society and reducing backlash when repression strikes.

Taking a step back, a fundamental component of affinity group-based autonomous organizing is of course affinity—that is, friendship. A lot of people don’t have a crew to go to a demonstration with, or go tagging with, or to even speak of these ideas with. Often, there isn’t anyone in our lives who we trust enough for these things, or who is even interested in them. Having public spaces to find each other in are vital to forming the bonds that grow into what we call affinity groups. Spending time together and sharing our lives with one another can strengthen these bonds over time and ultimately form the basis of the liberating experiences we create. Many who have spent time at Standing Rock or other protest encampments in the past have remarked that just the simple fact of living together, of making and sharing food around a fire day in and day out, caused their projects together to proliferate and bloom in ways that no amount of prearranged structure ever could. Putting our lives in common in such a way here in the city can be a more tricky proposition, as cities were in many ways designed to keep people locked into the role of isolated worker-consumers, but this doesn’t mean we can’t take small steps in such a direction. Reading groups, workshops, movie screenings, potlucks are a few of endless possibilities where we can come into contact with others who see the world as we do, with whom we experience community. Through these encounters, constellations of crews and affinity groups can emerge.

As a friend once said, the commune is that which sustains the attack and the attack is that which enlarges the commune. It is through friendship that we build the bonds necessary to self-organize and attack, and it is through attacking this world of misery that we can reclaim a sense of living, fighting because we have something to fight for: each other.