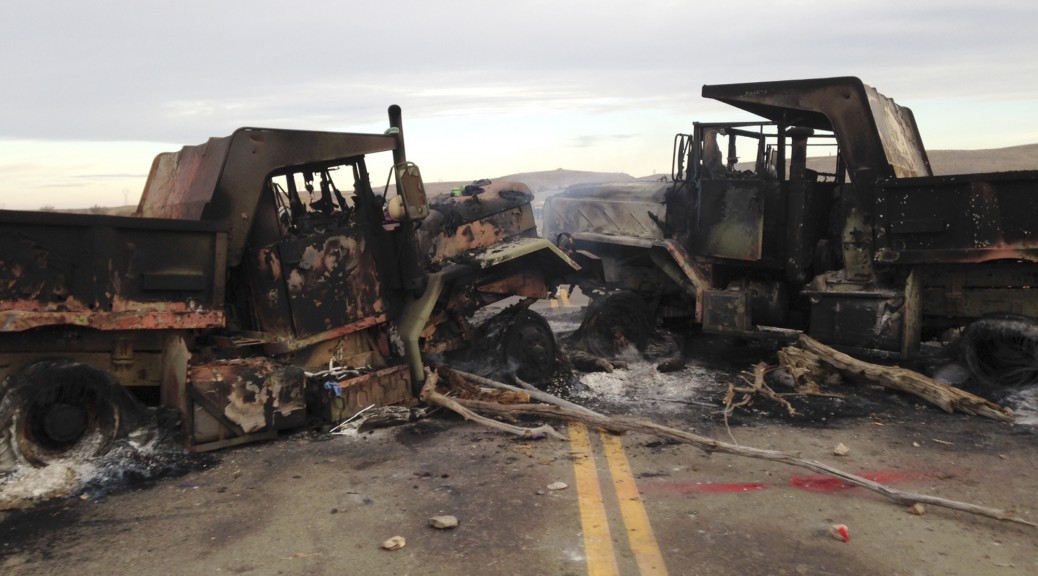 A NightFall Editor:  First off, can you tell us a little bit about the Dakota Access Pipeline?

Anonymous Participant: The Dakota Access Pipeline (DAPL), is owned by a Houston, Texas based corporation called Energy Transfer Partners, L.P. which created the subsidiary Dakota Access LLC that is building the pipeline. The DAPL, also known as the Bakken Pipeline, is proposed to transport 450,000 barrels of crude oil per day (which is fracked and highly volatile) from the Bakken fields of North Dakota to Patoka, Illinois. The current route of the DAPL will cross over the Ogallala Aquifer (one of the largest aquifers in the world) and under the Missouri River twice (the longest river in the United States). Dakota Access has systematically failed to consult with tribes and conduct a full Environmental Impact Statement (EIS).

In early August, Canadian pipeline giant Enbridge announced that, along with Marathon Petroleum, it will make a significant investment in the Bakken Pipeline System, including the controversial Dakota Access pipeline. As part of their statement, Enbridge also noted that, “Upon successful closing of the transaction, Enbridge and Marathon Petroleum plan to terminate their transportation services and joint venture agreements for the Sandpiper Pipeline Project [a crude oil pipeline proposed for northern Minnesota.]”

We know that this influx of resources from Enbridge will only speed up the construction process.

NF: When and how was the Sacred Stone Camp established?

AP: The camp is at the confluence of the Cannonball and Missouri Rivers. This is important location for the Mandan origin story as the place where they came into the world after the great flood. Where the two waters meet, created Iŋyaŋ Wakháŋagapi Othí, spherical Sacred Stones (thus the colonizers’ term ‘Cannon Ball River’), but after the Army Corp of Engineers dredged and flooded the rivers in the 1950s, the flow has changed and Sacred Stones are no longer produced. The camp is surrounded by historic burial grounds, village grounds and Sundance sites that would be directly impacted by this pipeline. The water of the Missouri River is essential to life on the Standing Rock Reservation as well as all of the nations downstream.

On April 1st, 2016, a group of over 200 supporters, led by forty riders on horse, under the Lakota name, “Chante tin’sa kinanzi Po”, which translates as “People, Stand with a Strong Heart!” left Fort Yates for a thirty mile trek to the camp located just north of Cannonball, North Dakota. They setup up tipis and a sacred fire. This camp has swelled in the past two months and has had multiple satellite camps across the river on private as well as unceded land on both sides of the river.

NF:  What is daily life like in the camp?

AP: Cooking, cleaning, gathering and chopping firewood and hanging out, especially around the campfire sharing food largely defined camp life. There are always families of all generations populating the camp. You can hear the people playing the drum, giving the camp its own heartbeat. Stories and memories are shared like water. Laughter and life are not uncommon.

The reality of the situation is that the people have been resisting the U.S. Empire and continuing genocide for so long that the drones and military surveillance flying above the camp the whole day becomes almost forgettable; like living next to a waterfall, the sound becomes a part of the landscape. We do counter-surveillance, logging the enemies movements. We can see all the pipeline construction equipment on the east side of the river.

Everyday there are prayers of resistance offered to the water, earth and ancestors. Without the water of life the camp and we would die.

NF:  How have folks at the camp mobilized to stop the pipeline thus far?  Has it been solely a publicity campaign/symbolic protest thus far or have folks directly interfered with construction of the pipeline?  Are there discussions about tactics at the camp?  Did these change after the Army Corps of Engineers approved the pipeline crossing the river and/or after the arsons affecting DAPL construction sites in Iowa?  As I see it, the camp and the arsons are complementary rather than conflicting tactics for stopping the pipeline; is this generally how people feel at the camp or is there a range of opinions on the matter?

AP: Like with any struggle, the people are not homogeneous in thought and tactic. Much of the camp’s rhetoric is of the “Non-violent Direct Action” type. Lock your arm to this piece of deconstruction equipment and take a picture with a banner for Facebook. But the Warrior Culture that is so rich in Lakota memory seems to counter a lot of the liberal, non-violent, NGO types. Comrades saw what happened in Iowa, heard about the $1,000,000 in damage and got inspired. I wouldn’t say that it was publicly celebrated because the camp’s tactic of “Non-violence” is the image they want to perpetuate. Like I said, it is a tactic… not everyone thinks that is what we need to dogmatically stick to. It is one thing to use Non-Violence as a rhetorical device in corporate media to spread your inspirational actions but it is another thing to preach it as your dogma in your private circles and use it to stop material damage to the infrastructure of ecocide. I see the former being invoked much greater than the latter.

NF:  How has the camp’s location on private land affected its character?  I would imagine the fact that it’s on private land gives it some protection against police but also means that if folks at the camp did engage in any illegal activities the land owner would be in a vulnerable position with regards to legal repression.  Is that a concern?  Does the person who owns the land have more say than others about tactics or daily matters at the camp?  What does the decision making process look like?

AP: The question of “private land” is especially difficult to address when we factor in Reservations (or what the U.S. Empire originally called and created them for, Prison of War Camps). The reservations are actually Federal Land. This means that local county and state police cannot enter it. A huge reason why Dakota Access (the company) is not building the pipeline thru the rez but literally a couple hundred meters north of it.

When the reservations were created, imperial logic of “borderization” was imposed; meaning, the communal and nomadic lands used for Life were divided by borders: fencing for animal domestication, invisible lines drawn on maps to denote “property” i.e. who owns what, etc. This fundamentally changed people’s relation to land. And this set up the infrastructure/hierarchies for surveillance and policing.

The camp exists in a way that resists this imperial imposition. We share food and water without hesitation. We have no leader. We all have knowledge to share and learn from each other. We recognize that the borders we build between ourselves are not “natural” anymore than the flooding in the 1950s by the Army Corps of Engineers is. They do not spread our Wildfire, so we continue to keep the eternal flame lit.

Instead of framing things in colonial terms of “legal/illegal”, it makes more sense at the camp to think in terms of effectiveness; effectiveness of stopping this genocidal project so the people can reclaim their Way of Life.

NF:  How can folks in the Twin Cities support the camp and keep up with what’s going on?

AP: Unicorn Riot has been doing amazing media coverage the entire duration of the camp and you can can thoroughly updated by reading and watching their media at their website search for tag: DAPL

From there you can donate to the legal defense, see what supplies are needed, and more.

Lastly, come to the camp! Everybody is welcome.